Savior of the White Birth

She started to develop madness due to her overzealous efforts to purify and her increase in mastery of divine conjurations.

She was born in the Lumen Holy Kingdom and the daughter of King Lumen XIII and his beloved Queen Amartie.

Her mission is to preserve the purity of humans. She is destined to battle the “World Enemy - The Gluttony” in some future war.

She suffered from various incurable ills at birth. She was cared for in the sacred spire where there are excellent medical facilities. One day she overcame her ailments by acquiring the job class “Prospective Savior”.
She is protected, since she was a baby, by two experienced paladins: Ishell Vorfush Serge and Uria Dufouns Serge. They are one of the few warriors who she trusts and socializes with.

Knowing that her task to hold back the onis is a difficult one - she studies magics. Later she seeks to control all of her subjects through subtle and powerful mind control. After enslaving the hearts of her subjects, she gained control over two almighty Emperor Dragons.

She participated in the Holy War leading the Lumen Holy Kingdom's forces and was killed by Ovarou after a harsh battle.

She is a genius.
Her cleverness with sorcery and summoning allowed her to transcend the typical human existence.
She has the Divine Protection of the 【Great God Of Birth And Wisdom】.
She can unleash “Ultimate Dragon Breath” of light and dark magics using her dragons.

She possesses a 【Sacred Treasure】 the 【Transcendent Staff of the Divine Right】.

Facing Ovarou with the Border Saint and the Cleavage Saint

Facing Ovarou with the Hermit and the Hero of Light 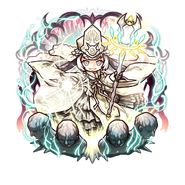 Annalize (Savior of the White Birth) 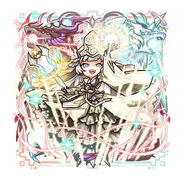 Annalize【Royal Annihilator】 during the Holy War 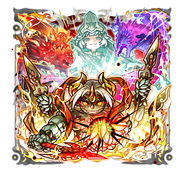 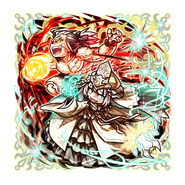 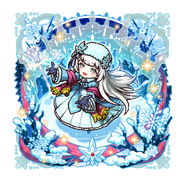 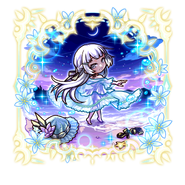 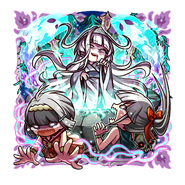 Annalize【Revelator】
Add a photo to this gallery
Retrieved from "https://re-monster.fandom.com/wiki/Annalize_Dina_Einz_Lumen?oldid=115128"
Community content is available under CC-BY-SA unless otherwise noted.