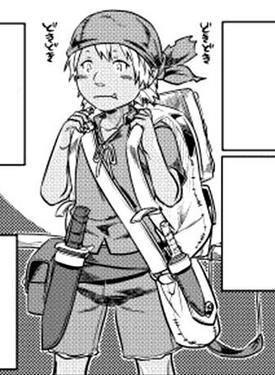 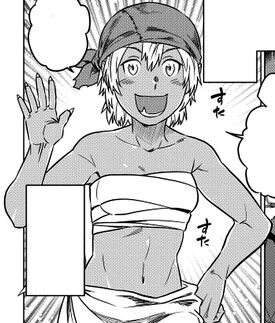 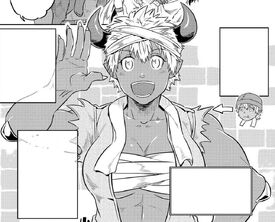 As a Half Earth Lord 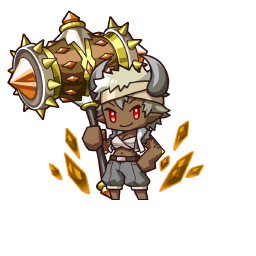 As an Earth Lord in the mobile game 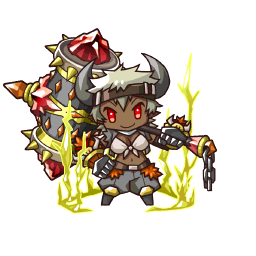 As a Hell Demon King in the mobile game

E is the Head of the logistical support group «Pleasure» and leader of the mining group. She was the first goblin to ask Rou to train them.
She was also placed 4th in the first hierarchy tournament. And when Rou team needed an extra member, she became that member.

E seems to have a a personality similar to Mi's, socially being as cheerful and relaxed but when she works she displays a similar devotion for mining to the one Sei has for magic, she also seems to have a similar fighting mentality: teasing yet pragmatic in combat even though her fighting style is more similar to Kichi's; involving overwhelming the opponent with brute force and attacks that alter/destroy the terrain.
She accepts Rou as the reasonable leader yet doesn't seem to be attracted by reliability alone so something in Kichi other than the fact he's complient to commands despite his agressiveness and low inteligence (making him sort of diligent) she finds endearing.

As a Goblin, E is the size of an elementary school kid with green skin. She wears a bandana over her hair (it's color is not mentioned before she became a Half-Earth Lord) and has a canine protruding out from her mouth. This is what sepparates her from the other female goblins.

When she ranked up to hobgoblin, her appearance became closer in appearance to a human and the size of a teenager.

She is at least 240 centimeters tall, and a muscular physique.
She also had two large horns that extend 20 centimeters out and curve back on her forehead while having short yellow hair and garnet-like eyes.
Her skin appeared to be firm, but also includes all the softness that came from being a woman, and her breasts were comparable to the size of watermelons but had better shape to them.
Lastly, yellow looking Demon Orbs, around five centimeters in diameter, are embedded in her abdomen as well as under both her elbows. They appeared to be the same type of stone that Hobusei-san’s [Lord] species had.

She has developed a black tattoo similar to Rou’s on her right arm and shoulder.

E got two new weapons, the [Earth Goddess War Pick] and an enormous [Earth Goddess Shovel] as a set that have the capability to accommodate her new, larger, size. Also, because of the change in her size due to changing species, she was given a new set of clothes consisting of surplus magical items.

E is dressed like a farm boss, she has the towel Rou made her wrapped around her body and tucked into her breasts, exposing the top of her chest and her navel.

She looks more or less the same as when she was a half earth lord, aside from the fact that she is now 4 meters tall.

Abilities of her species included manipulation of the earth. One of those was particularly related to mining; the ability [Complete Geological Comprehension] was able to see the brittle points of the bedrock's areas. This aided the mining for more types of ore while, at the same time, strengthened her body.

Barehandedly, she can dig more effectively than when she was equipped with a pickaxe as a hobgoblin.

Also, it seems that she can use lightning based magic, and it can occasionally be useful during mining to locate ores.

In combat E is nothing to fool with either, given that she can easily break rocks with her bare hands.

Retrieved from "https://re-monster.fandom.com/wiki/E?oldid=96073"
Community content is available under CC-BY-SA unless otherwise noted.