Mage
Goblin (ゴブリン, Goblin), (小鬼, Ko-Oni) is one of the demi-human/monster species with intelligence to build a civilization. They inhabit caves inside forests.

A goblin has an appearance similar to a human, except they have a short pointy head and slender fingers. With green skin color and mostly bald head for a male goblin and short hair for female goblins. Male goblins mostly have white blank eyes without pupils, as opposed to females who do.

A newly born Goblin has the size of a newly born human. It only takes goblins a few days to fully mature, at which point they have the appearance of a junior school kid. They only continue their growth after ranking up to Hobgoblin at level 100.

A standard uniform for goblins to wear is a worn out loincloth which cover some of their vital parts, the male one covering their lower half body and the female covering both the upper and lower part of the body

Standard Skin Color： Green. However, it varies by race.

Newborn goblins are restricted to eating bugs, berries, and nuts for nourishment. On their fourth day of life, hunting is unavoidable since rationing is no longer available.

A goblin is usually a stupid and easy going monster, even though they can become fierce when faced with a difficult situation such as meeting an enemy. The growth rate of a goblin from a newly born to a standard goblin is very fast, just around 3 days. A normal Goblin's Lifespan is around 20 years. Goblins have a low conception rate, thus they kidnap female humans for easy reproduction. All goblins have to hunt their own food, or they may follow someone they deem worthy of being their leader.

A newly born goblin has the same characteristic as a baby human, they tend to get sleepy easier and cannot move around. However, after two days they would grow to the size of an elementary school student. They have a rapid growth ability since they need to adapt to harsh environments. A few days after birth their physical ability skyrockets as they can run at moderate speed and jump moderately high.

Most goblins have low physical and mental capabilities. They rarely use tactics or any strategy for hunting or anything. However, they can be taught and learn new skills. When goblins rank up after reaching level 100, they become stronger and some become able to use magic.

All goblins start out as goblins. As they train, kill, or eat other monsters they gain experience and level up. When a goblin reaches level 100 they may gain the opportunity to Rank Up or Evolve into a higher form of their species.

Elites are goblins who have reached level 100 but for some reason have failed to evolve beyond the rank of goblin. Even though they have failed to rank up they are vastly more powerful than even some hobgoblins as they gain special skills at this stage.

It is known that there is a one-in-a-million chance of a Mixblood being born, but it is unknown if a half-goblin or half-hobgoblin are even possible or have existed previously in the history of the Re:Monster world.

Here is the evolutionary tree of the Goblins. 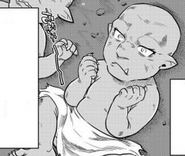 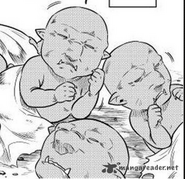 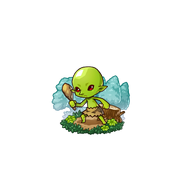 Your MC as a Goblin

Community content is available under CC-BY-SA unless otherwise noted.