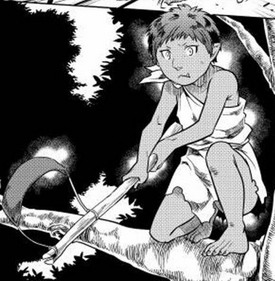 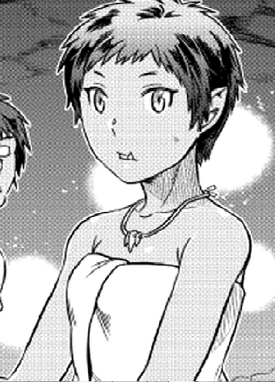 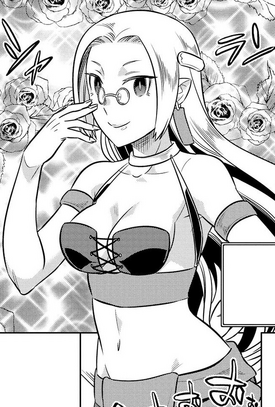 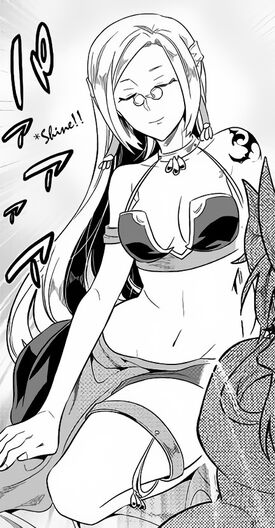 As a Vampire Noble 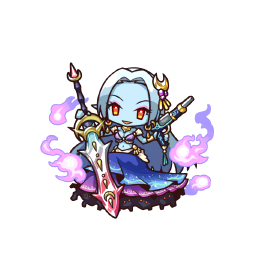 As an Ice Blood True Vampire in the mobile game

Major/3rd in the Goblin Community

Mi was born in the same generation as Rou. She approached Kichi and Rou when they were all goblins. From this encounter, Mi was inducted into the group. Later, she became the head of the Regret Corp, dealing with long range weapons, namely, slingstaffs, bows and cross-bows. As well as Teacher of the goblins, in continental alphabet and Rou's rules for the community.

Mi has an easy going personality and always wants to be with Rou. When Rou is in danger or attacked, Mi shows a more vindictive side, willing to destroy the perpetrator, regardless of circumstance. She praised and complimented Rou with words such as strong, smart and cool when they first spoke.

She enjoys playing with the other girls in Parabellum, including the human ones.

Mi is very refined after becoming an Ice Blood True Vampire, opting to enjoy Hyulton's blood as a form of fine wine as she was on her journey to the Dark Continent.

Mi's bloodlust and violent urges come out not only when Rou is slighted against, but also when any other man touches her, even if slightly.

Mi's faith and loyalty to Rou is seemingly absolute and unrelenting, telling Netsuki during the fight with the Jade Eagle that Rou would never lose in combat and so, would never interfere until the match's conclusion and on the off chance he did lose, she would then kill whoever was responsible for it and would die herself with no regrets if need be.

As a goblin her appearance is ugly as any goblin but her name had the word “beauty" in it. Implying she was a beauty compared to other goblins which turns out to be true in her future Rank Up's Appearance.

Her height is around 1.6m+ the size of a teenage human. She looks much cuter as a hob-goblin compared to her goblin form.

Her height is no less than 180 cm, a clearly charming body with a narrow waist accentuated by her breasts whose size would overflow in your hands, a moon-like beautiful face more fleeting than an Elf's, glittering silver hair that flowed down to her waist, fine skin, and finally, red eyes with golden pupils.

Mi has developed a black tattoo similar to Rou’s on her leg (on her back in the manga).

Mi received a blue and white dress made with dark magic, and bound together with steel like thread, she also got glasses related to her new ability that is a trait of her race, the [Eyes of Bewitchment]. These glasses work to seal the effects of her eyes’ ability, it is best not to look into her eyes for too long. As a present she got an enchanted claymore called the [Drop of Moonlight], the sword looks like a piece of artwork made with ice crystals.

Mi has become like a noble's daughter, on her front side the zipper stops just short, liberating the rest of her top.

After Mi ranked up she became far more powerful than most of the other types of vampires. She looks generally the same but her tattoo has grown to cover slightly more of her skin. It’s also changed to a darker color.

Mi is fast and clever, with high intelligence, which allows her to use magic later on as she Ranks Up.

It's hard to imagine from looking at her delicate appearance that her strength and agility was remarkably different from before. She would be evenly matched with Kichi whose base stats were higher than Rou's. Even with the Blessing of God, in the daytime the undead body of a Vampire would carry a weakness to the sun. But because she is a Dhampir-Subspecies, this weakness is not an issue. As always, she was able to go out without any limitations even in the day time.

Contrary to her outer appearance, her inner power has greatly changed. Her existing abilities are almost all enhanced, both in scale and power.

Rou’s Mistresses- she gets along with them and they spend the nights together along with Rou.

Retrieved from "https://re-monster.fandom.com/wiki/Mi?oldid=107668"
Community content is available under CC-BY-SA unless otherwise noted.