View source
watch 01:36
We're Getting Mutants in the MCU - The Loop
Do you like this video?
Play Sound

The Rank Up System is the system that allows monsters, or simply nonhumans, to become stronger through [Rank Up/Existence Evolution] (存在進化) (ランクアップ).

An individual's strength is measured primarily by levels, with the max being 100. The growth Monsters can attain through leveling is much lower than that of a Human through their Jobs System.
However, when Monsters reach level 100 they can "Rank Up" to a higher species, giving them an incredible boost in stats.


Furthermore, specialties that the individual Monsters demonstrated prior to Rank Up, or conditions they might have cleared, may influence what type of monster they evolve into.
It is even possible for a Monster to reach level 100 and be incapable of ranking up since it has not fulfilled all the conditions. It is unknown whether clearing the conditions later allows you to rank up later as many of the goblins from Rou's generation remained goblins up to and through the new year.

An example of Rank Up would be E, who as a Hobgoblin, demonstrated proficient skill in mining and Ranked Up into a Half Earth Lord.
Occasionally, the Monsters receive [Blessings], also known as [Divine Protection], making them either [Variants], [Subspecies] or even [Rare Species] of their race. 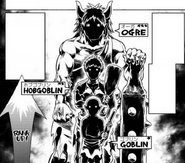 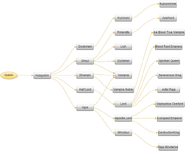 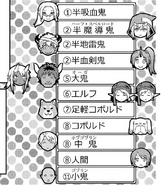 Half in front of a race’s name means that it had inferior overall specs compared to the true species. And the next time they rank up they will officially become the species.

They're able to use defensive and restorative magic and abilities.

Basically means they're able to use magic...this includes Ogre Mages, Hobgoblin Mages, etc. For Hobgoblins who practice magic, becoming Ogres is not a popular route. Although the probability is lower, mage-type monsters are races that advance on routes specialized in using magic. They often become Half Spell Lords, instead. This specialization comes at the cost of lower physical abilities than other lord types, but magic is in the first place a technique to one-sidely torment the enemy from a distance.

They've gained the ability to tame a monster and turn it into their pet (so, something similar to how Rou makes familiars, most likely). See Day 121 for when they're first introduced.

Shamans can increase the speed of, and give [Light Resistance] to the undead races, so they can last even longer.
It is very convenient because now they can be used for an even wider variety of tasks. They're also able to control undead to an extent. At the very least they can control and sense spirits. Day 71, Day 74, and Day 86 give more information about them.

Community content is available under CC-BY-SA unless otherwise noted.
Advertisement