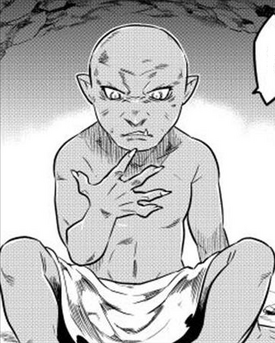 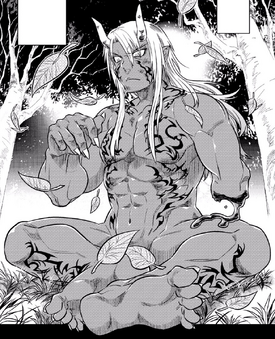 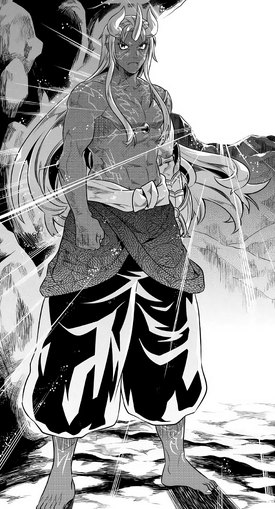 As an Apostle Lord 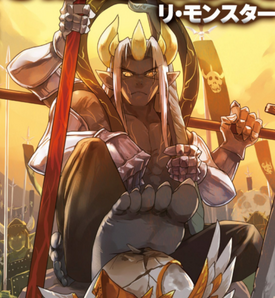 Colonel/1st in the Goblin Community

Rou, formerly Tomokui Kanata, was a human with an esper ability. One day, he was killed by Kirimine Aoi, a childhood friend who became his stalker. Later, he wakes up only to find himself reincarnated as a Goblin, a Monster Species considered to be of the lowest class. His memories as a Human and his original esper ability, Absorption, remained in him. Having a second chance at life, Rou is determined to live it to the fullest.

Rou is very intelligent, having an extraordinary amount of knowledge that he retains from his previous life. He is very cunning, using Goblins as sacrificial pawns and later as underlings. The first Goblin used this way is Gobukichi, who later becomes his right hand man. Despite this, he has a kind attitude towards his Goblin underlings, helping them learn to hunt, training them, and even encouraging them with gifts when they achieve something good.

He adapts easily to every situation and condition, which can be seen from his strategies to hunt and his ability to solve every problem. He also greatly hates doing something without "righteousness", unless it is important and required to survive. An example is when he is angry and uncomfortable when he sees the female Humans that were kidnapped in the cave, and repeatedly violated in order to produce more Goblin babies.

He doesn't like going into detailed explanations, he likes his food and booze.  He's blunt and likes solving problems the easy way. At the same time, he's very intelligent (not that obvious with his speech/thought process) and actually pretty reasonable. It is shown he actually cares about those around him. It's like the concept that even if it's a tool, it should be maintained and well treated. He has a very deeply seated consistent Buddhist's version of compassion (it's closer to lay practice than the monastery version), as in, he doesn't really kill for the sake for killing, there's a purpose behind it (one aspect with the Buddha of mercy is the complete annihilation of your opponent, ie. cut him down and stomp on his skull, there's still a mural of it in Tibet.  Killing for sustenance is actually well tolerated).

As a Goblin, Rou has the size of an elementary school kid with a bald head and green skin. He looks like an average typical Goblin, except for a canine protruding out from his mouth, and having a pointed eyelids.

When he ranked up to Hobgoblin, he became closer in appearance to a human. He looks like his old self in his teenage years, having hair growing on his head. His skin became black because he is a Rare Variant kind of Hobgoblin that was blessed by one of the oldest Gods, the Great God of Origin and Demise.

As an Ogre, Rou's body remained black, he had unfamiliar red lines all over his body which resembled tattoos. His height was a full human arm length taller than that of an adult male (i.e. 2 meters and 50 centimeters) and he has developed 6-pack abs. His hair reached below his shoulder blades. Aside from growing longer, it has also turned gray. Lastly, two sharp horns had grown out from his forehead. When he touched them, they felt extremely hard. His genitalia has also greatly increased in size.

When he became an Apostle Lord, Rou was around 50 centimeters shorter than when he was an Ogre (i.e. approxtimately 2 meters) but his muscles were many times denser making him at least a dozen times stronger. His black skin is the same, but the red tattoos on his body changed to a golden color. He has 3 horns that are stronger and sharper than before. His eyes turned blood red, same color as Dhammi's, and can read from a book from nearly fifteen meters away. His hair had grown down to his waist and is silvery gray, which Spinel Fean had tied into a ponytail with golden thread. He also has 5 "Demon Orbs" buried in his chest, elbows and both knees. the color was a mixture of black, red and gold.

A bit taller than the Apostle Lord and instead of three horns he now have five which are also thicker. They have sharp edges and are slightly curved, extending as if they were trying to pierce the sky. It looks almost like a crown. His hair color became silver white and remained at the same length. Also his eyes color turned gold. Have another set of arms (now have four) the two new arms are located near the shoulder, just below the armpit. There are Demon Orbs in the center of his chest, in his four elbows and four hands, both knees, in his navel, and in both sides of his shoulders.

Please Note this Page is a work in progress and will continue to be adjusted as the web novel is translated.

The abilities can be classified into 3 types

This page has an account of Rou's abilities acquired up till day 260 organized by when and how obtained and by type with description.

Obtained from consuming the Orc:
Obtained while sleeping via [ Evolution (Rank Up) ]:

Obtained before sleeping through the world's laws:

(Note: it's uncertain how the following abilities should be translated)
Obtained from eating 【Precious Core of the Divine Spirit of Spring Water, "Ankuritoriamu"】

By continuously eating knobs made of the cloned heroes, Rou gets:

By eating 【Tampering Soul Club of Numerical Formula】, Rou gets:

By using his ability synthesis:

By eating Hyulton the 【Demon Emperor】:

By eating the Beast King Lionel the [Beast King] :

By eating the Dungeon boss [Purunto-Nekujeto] :

Due to his Absorption ability, Rou can gain abilities from objects and creatures by eating them. Since he can't have 2 of the same skill his Original skill becomes upgraded/stronger when he eats the same thing multiple times.

Later on when he Ranks up to Overlord, he gains the skill [World Enemy - Insatiable Gluttony] which is similar (though not completely identical) to his Absorption ability. Thus giving him two abilities capable of granting him benefits from eating.

Some abilities have been made obsolete due to Rou's Synthesis ability creating better versions of the abilities. Despite that, those original abilities are still listed here for both the sake of completeness and that the author has said synthesized abilities stay on Rou's list, but won't get used again on their own in the story in the future.

This is for any Ability which Rou can't turn off. (example: abilities gained from completing the frontier psalms)

Retrieved from "https://re-monster.fandom.com/wiki/Rou?oldid=106130"
Community content is available under CC-BY-SA unless otherwise noted.